Astronomers discover what might be the largest known structure in the universe that leaves its imprint on cosmic microwave background radiation.

Synopsis: A very large cold spot that has been a mystery for over a decade can now be explained.

In 2004, astronomers examining a map of the radiation leftover from the Big Bang (the cosmic microwave background, or CMB) discovered the Cold Spot, a larger-than-expected unusually cold area of the sky. The physics surrounding the Big Bang theory predicts warmer and cooler spots of various sizes in the infant universe, but a spot this large and this cold was unexpected.

Now, a team of astronomers led by Dr. István Szapudi of the Institute for Astronomy at the University of Hawaii at Manoa may have found an explanation for the existence of the Cold Spot, which Szapudi says may be “the largest individual structure ever identified by humanity.” 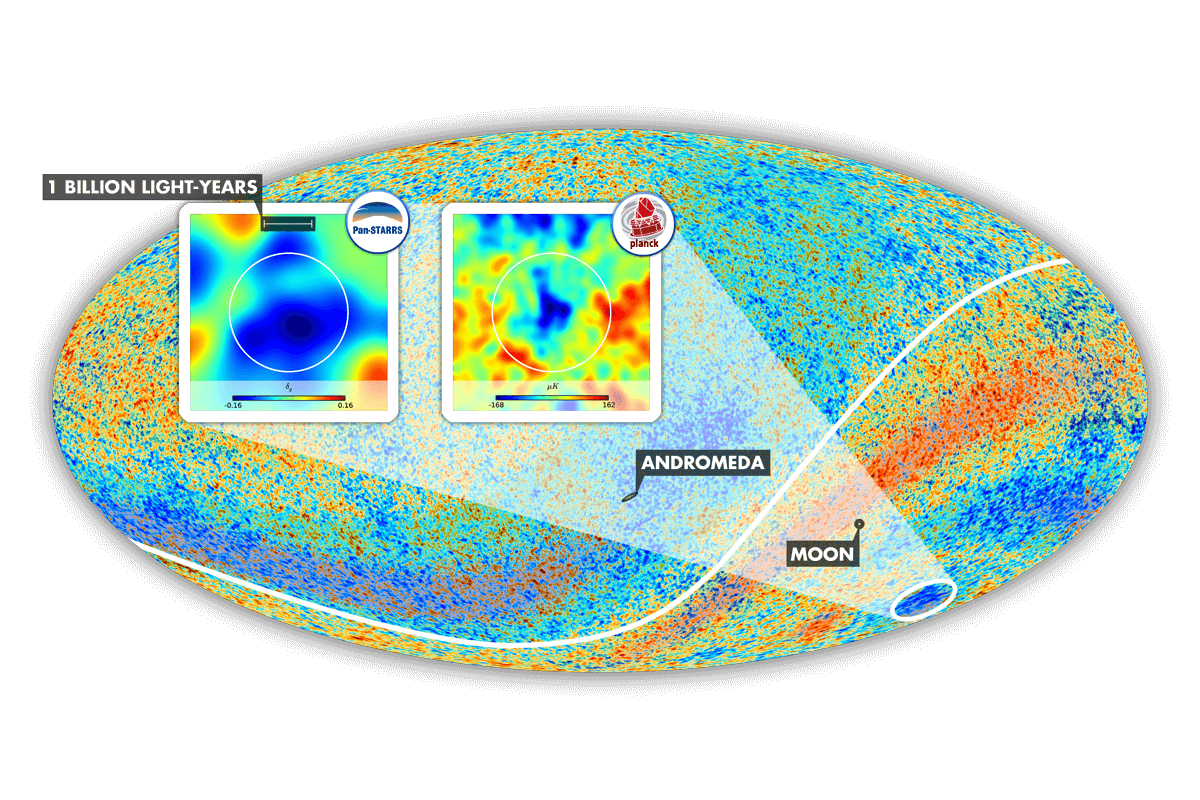 The Cold Spot area resides in the constellation Eridanus in the southern galactic hemisphere. The insets show the environment of this anomalous patch of the sky as mapped by Szapudi’s team using PS1 and WISE data and as observed in the cosmic microwave background temperature data taken by the Planck satellite. The angular diameter of the vast supervoid aligned with the Cold Spot, which exceeds 30 degrees, is marked by the white circles. Graphics by Gergő Kránicz. Image credit: ESA Planck Collaboration.

If the Cold Spot originated from the Big Bang itself, it could be a rare sign of exotic physics that the standard cosmology (basically, the Big Bang theory and related physics) does not explain. If, however, it is caused by a foreground structure between us and the CMB, it would be a sign that there is an extremely rare large-scale structure in the mass distribution of the universe.

Using data from Hawaii’s Pan-STARRS1 (PS1) telescope located on Haleakala, Maui, and NASA’s Wide Field Survey Explorer (WISE) satellite, Szapudi’s team discovered a large supervoid, a vast region 1.8 billion light-years across, in which the density of galaxies is much lower than usual in the known universe. This void was found by combining observations taken by PS1 at optical wavelengths with observations taken by WISE at infrared wavelengths to estimate the distance to and position of each galaxy in that part of the sky. 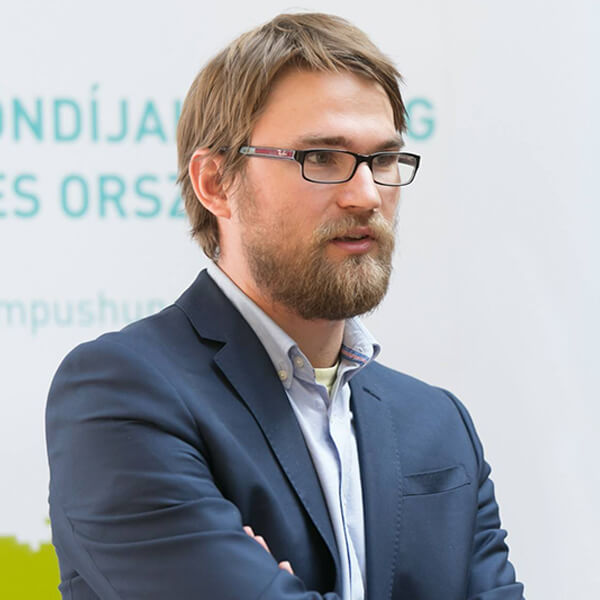 Earlier studies, also done in Hawaii, observed a much smaller area in the direction of the Cold Spot, but they could establish only that no very distant structure is in that part of the sky. Paradoxically, identifying nearby large structures is harder than finding distant ones, since we must map larger portions of the sky to see the closer structures. The large three-dimensional sky maps created from PS1 and WISE by Dr. András Kovács (Eötvös Loránd University, Budapest, Hungary) were thus essential for this study. The supervoid is only about 3 billion light-years away from us, a relatively short distance in the cosmic scheme of things.

Imagine there is a huge void with very little matter between you (the observer) and the CMB. Now think of the void as a hill. As the light enters the void, it must climb this hill. If the universe were not undergoing accelerating expansion, then the void would not evolve significantly, and light would descend the hill and regain the energy it lost as it exits the void. But with the accelerating expansion, the hill is measurably stretched as the light is traveling over it. By the time the light descends the hill, the hill has gotten flatter than when the light entered, so the light cannot pick up all the energy it lost upon entering the void. The light exits the void with less energy, and therefore at a longer wavelength, which corresponds to a colder temperature.

Getting through a supervoid can take millions of years, even at the speed of light, so this measurable effect, known as the Integrated Sachs-Wolfe (ISW) effect, might provide the first explanation one of the most significant anomalies found to date in the CMB, first by a NASA satellite called the Wilkinson Microwave Anisotropy Probe (WMAP), and more recently, by Planck, a satellite launched by the European Space Agency.

While the existence of the supervoid and its expected effect on the CMB do not fully explain the Cold Spot, it is very unlikely that the supervoid and the Cold Spot at the same location are a coincidence. The team will continue its work using improved data from PS1 and from the Dark Energy Survey being conducted with a telescope in Chile to study the Cold Spot and supervoid, as well as another large void located near the constellation Draco.

The study is being published online on April 20 in Monthly Notices of the Royal Astronomical Society by the Oxford University Press. In addition to Szapudi and Kovács, researchers who contributed to this study include UH Manoa alumnus Benjamin Granett (now at the National Institute for Astrophysics, Italy), Zsolt Frei (Eötvös Loránd), and Joseph Silk (Johns Hopkins).

Founded in 1967, the Institute for Astronomy at the University of Hawaii at Manoa conducts research into galaxies, cosmology, stars, planets, and the sun. Its faculty and staff are also involved in astronomy education, deep space missions, and in the development and management of the observatories on Haleakala and Maunakea. The Institute operates facilities on the islands of Oahu, Maui, and Hawaii.

Institute for Astronomy, University of Hawaii